We Have A Game Changer

Madiba, Marikana, Zuma, the rise of the EFF, the climate crisis, #GuptaLeaks, Daily Maverick covered it all. We Have A Game Changer, A Decade of Daily Maverick tells the story behind the stories of a defining decade in South Africa’s history. Packed with Zapiro cartoons, video linked interviews with your favourite Daily Maverick journalists and some laugh-out-loud anecdotes, this is the perfect read for anyone who has ever wondered what it’s like to work on the frontlines of history.

Starting a South African digital media business in a time when nobody had a clue how to make money from online news was a bad idea. Doing it on a shoestring budget with a skeleton staff? Downright foolish.

A decade later, Daily Maverick has managed to establish itself as one of the country’s most influential and intelligent publications – but not without a disproportionate amount of death threats, grey hair and empty bank accounts. We Have A Game Changer lifts the lid on the often unbelievable efforts to keep the dream alive.

Marikana, Madiba, Mangaung, Nenegate, Nkandla, Oscar Pistorius, the rise of the EFF, the fall of SARS, 10 years of Zuma and, of course, the #GuptaLeaks: Daily Maverick covered it all with the depth and the signature wit that this plucky digital publisher has become known for. Tracking the biggest moments in South Africa over the last decade and the knock-on effect that they had on both the editorial and business endeavours, this is the story behind the stories. We Have A Game Changer tells what it was like to construct a first draft of history. And what a history that was. 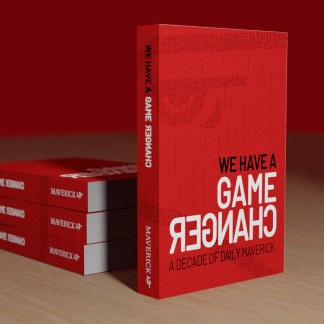 Add to cart
Leave a review