To The Wolves: How Traitor Cops Crafted South Africa’s Underworld

Cops and Robbers: we think we know how to tell the good guys from the bad, but when it comes to Cape Town’s crime scene, things are anything but clear cut. Controlled by gangs, fuelled by drugs and policed by cops that, all too often, get caught on the wrong side of the action.

Among the Cape Town cops who have consistently claimed that colleagues are trying to pin crimes on them are Major General Andre Lincoln (former head of a national police unit mandated by Nelson Mandela), Major General Jeremy Vearey (known as SA’s top gang buster) and Lieutenant Colonel Charl Kinnear (who was investigating some of the country’s most brutal underworld crimes when he was assassinated in September 2020). Colleagues and suspects alike pointed to all three as colluding with criminals. Who is telling the truth?

Journalist Caryn Dolley has tracked this tangled trail, following the corruption breadcrumbs, sifting through court documents, laying fact upon fact and exposing the depths and breadth of systemic corruption that was set in place during apartheid and has only become more entrenched during the first decades of our democracy. She has traced the rot from cops to underworld to politicians and back, exposing duplicitous networks that have for decades ensnared South Africa in an expanding cycle of organised crime and cop claim crossfire. At the centre of this crisis is the mounting collateral: the victims of Cape Town’s manufactured killing fields.

To The Wolves tells the true-life story of how South Africa’s underworld came to be, what continues to fuel it today and how the deception and lies go all the way to the top…

ABOUT THE AUTHOR: Caryn Dolley

In 2012, after covering countless crimes and court cases, she started reporting on interlinked underworld-related matters. In June 2019 her book The Enforcers: Inside Cape Town’s deadly nightclub battles was published by Jonathan Ball Publishers. From late 2019 Caryn spent a year at a non-profit organisation investigating how South African munition companies may profit from war crimes in Yemen. She has since shifted focus back to local and global organised crime and its suspected links to the South African state. 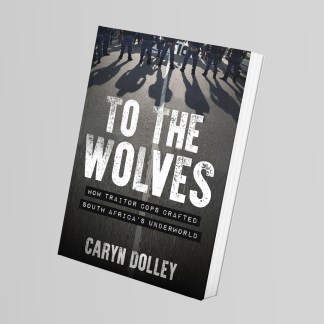 You're viewing: To The Wolves: How Traitor Cops Crafted South Africa’s Underworld R295.00

Add to cart
Leave a review